Greetings to One and All on St Patrick’s Day 2017

The Making of a Parade Banner.

Having been lucky enough to have found Luton Irish Forum as a venue for our local calligraphy group, I was really happy to be asked to get involved with the St Patrick’s weekend celebrations. LIF commissioned local group, Olympian Productions  to stage a Father Ted Pageant entitled Craggy Island Local Priest Awards.  A banner was required for the parade and as a backdrop  for the stage.

My first thought was to materials, etc. The previous St Patrick’s weekend was a rather wet and windy affair so I needed everything to be weatherproof. Jackie at Jewels came up with some yellow polypropylene curtain blind material about 5 x 4 feet that looked as if it might be tough enough and would take permanent marker and acrylic paints .

To show how I go about this type of project it seemed a good idea to do most of the planning and marking out during group evenings at LIF. The first job was to rough out the actual text in Uncials on wallpaper with double markers to ascertain letter-size, then after marking in the x heights in pencil, a deep breath, and straight in with the double markers. 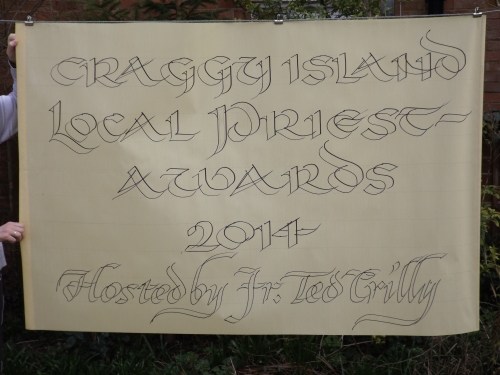 Then, at home, some Gold, Green, and white added.

Next, A couple of 7 foot dowels were wrapped and glued in place. 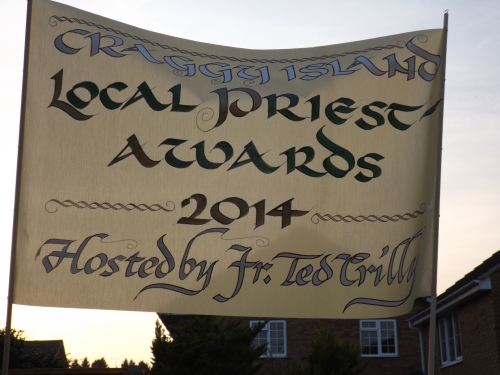 A few judiciously placed holes to aid pulling through the air and the banner was ready for use. It came through the parade unscathed and was placed on the stage as a backdrop to a hilarious performance by Mrs Doyle, Fathers Ted, Jack, Dougal, various other priests and the Bishop.

The production was well received by a huge crowd and earned an award for the best group effort.

I thoroughly enjoyed being part of the project and for being able to join in with so many other events over the weekend. The countdown has begun for next year. Gill and I are hoping the committee might ask us to contribute something.

Having been immersed in “Irishness”, (More about this in the next day or so), for the last few weeks and also being treated to such a wonderful weekend, I just had to put pencil to paper. So, here is my St Patrick’s Day Greeting to one and all.
Print it off, preferably in A3, and get the children to colour it in.
Slainte! 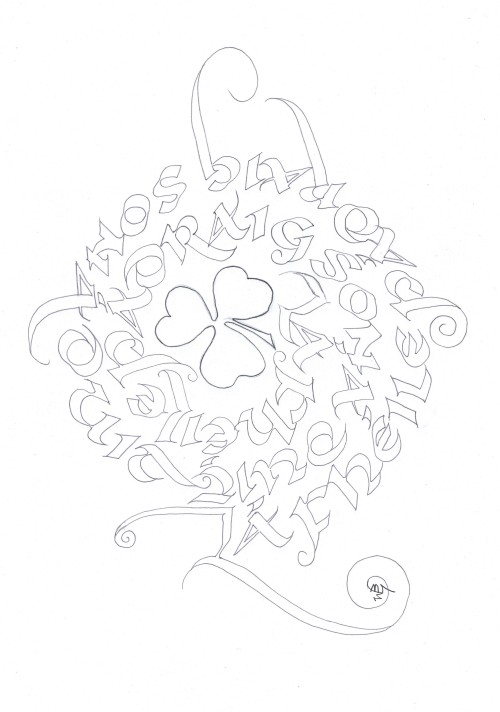 Posted in CALLIGRAPHY,CALLIGRAFFITI,LETTERING,HOW TO, Uncial