Failure. Does it help or hinder?

In whatever you are trying to achieve, Milton Glaser has the answer.

On Saturday and Sunday of this weekend, Brother William will be hard at work in the scriptorium. Come and say hello, and perhaps help him with his scribblings.

If you have an interest in the history of Dunstable, or indeed, the wider history of the UK, these Medieval Dunstable project pages, especially the Timeline and Tournament articles must be seen. Thanks to Jean Yates and team for all their hard work on this project and to Dunstable Town Council for arranging this weekend, and for inviting me along to join in the celebrations.

If I get chance, I hope to take some pics of the weekend’s entertainment and will post them asap.

JEWELS. Another knot in my golden thread?

Isn’t it strange, how sometimes, something catches the eye and demands your attention?

Walking through the shopping precinct in Houghton Regis, a small town between Luton and Dunstable, that Gill and I rarely visit, I noticed a shop window full of old reconditioned sewing machines.  It was not the machinery that had attracted me but the various display cards that accompanied them which were all written in a very distinctive hand.  Then I realised it was not just sewing machines for sale but a whole range of art and craft materials, and what scribe can stop themselves from entering what they see as an Aladdin’s cave?

Cutting a very long story short.  I found that the cards in the window were written by Julie Kent, a co- student of the calligraphy class I had attended in Dunstable College, some thirty-ish years ago.  Though we have both taught and practised our art in the same area for all this time, we had never come into contact again.

Now, it seems that Julie, in partnership with Les, runs this emporium as an outreach for a local church and offers facilities for children’s groups, various classes, arts/crafts, and yes you’ve guessed it, CALLIGRAPHY WORKSHOPS .

Subsequently I have returned on two occasions during calligraphy sessions and having met the participants and seen some of their work, I must say I am impressed, not only with the standard of work achieved, but with the enthusiasm, commitment and friendliness of all involved, and the TEA!  Hot, strong and sweet!  Oh! and each time I have walked away with a bag full of goodies.  Brand names at very reasonable prices.  I can’t wait to get to grips with the Fabriano papers.

Some of the works created by Julie’s group.

On top of all this, Julie continues to take commissions. Not only for calligraphy but also her beautiful watercolour paintings.

Some of Julie’s pieces . 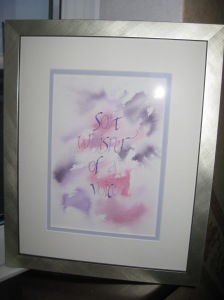 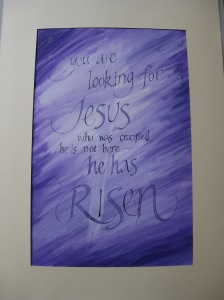 Congratulations to all you hard-working folk at JEWELS ARTS and CRAFTS CENTRE, Bedford Square, Houghton Regis.  You are doing a wonderful job.

I hope you have enjoyed this foray into deepest Bedfordshire.  I hope it will be a reminder to us all to keep our eyes open for those little gems that are literally on our doorsteps.

A link to my subsequent Calligraphy Workshop at Jewels.

Regular visitors will be aware of the many videos and other educational tidbits that are hidden away in links here at Bill’s Space.  Recently I have happened across a few that really deserve to be a feature in their own right, so every now and then I will post something that really ” gets me going ” as it were.                 This first one was pointed out to me by Angela, one of my Fb friends, herself a teacher, calligrapher, artist.  Thanks Angela.  This is a great example of the enthusiasm of the teacher which is obviously rubbing off on the children in this workshop.

This next, is an example of the plethora of videos produced by the BBC and freely distributed on YouTube.

I have recently posted links to BBC iPlayer videos and have been disappointed to hear that many non UK viewers were unable to see them.  I am hoping that this one will open up new posibilities.  See related videos.

This one was pointed out to me by Heather.

A Visit to the Vatican Library.

An educational philosophy encompassing all creative subjects backs up the teaching of handwriting in France.

From Masters to Beginners

PLEASE COME AND JOIN US

ALL WE ASK IS THAT YOU POST ONE WORD.

THE ONLY RULE IS THAT THE WORD MUST MEAN PEACE

NB  This group and all its pictures were lost in some sort of Fb mix up. If your pictures were in the old group, don’t let your hard work go to waste. Please join the new group and replace your pics.

Well.  Here we are at the last knockings of 2009 and I am looking back on my progress and wondering what the heck I was thinking when, back in March, I first decided to set out on this journey.  Until then my experience of using computers was limited to the very useful if mundane knowledge gained from a basic and then a more advanced CLAIT course that Gill and I took together.  Things fell into place quite easily and with excellent instruction from the tutors I actually managed to gain certificates of competence.  It was not long before I started to explore the more exciting and practical side of IT, computer graphics!  For a while the scribe was lost as the geek took over.  I learned to scan, reduce, blow up my work to immense proportions and was amazed at the detail one could see when magnifying a letter with an x height of 1/8″, to the point where the pixels give up the ghost.  Try it.  If you want to see how a letter is constructed there is no better way.
Flash forward to February ’09.  The first real snowfall of the year and I start snapping away with my newly acquired hi tech gadget then find the video option is a bit more sophisticated than I thought and that I am able to film for about eighteen minutes before running out of memory.  A whole new learning curve began. First downloading, then editing, publishing, sending to Youtube, adding the music then sitting back and watching “BEASTIE IN THE SNOW”.  Two minutes of really amateurish stuff that took simply ages to process.  To this day I can’t say that I have found many short-cuts to make things easier or quicker.
Anyway, Beastie’s debut has had 301 views to date so someone must like it.
Yes, you have guessed it.  Browsing YT calligraphy I had found some very good instructional demonstrations but thought I could do better than some of the, to be honest, rubbish that is out there.  And so “CALLIGRADOODLES” came into being, and now there are four.  Between them, on various sites they have been watched by thousands of people. (Early in 2010, I am hoping to add 5&6 and 7&8, Italic and Old English Blackletter, though I am rather hoping that a friend of mine might save me some work and do 5&6 for me.  Hehe.  We shall see).
Then the fun really started.  My love of calligraphy/lettering/letter form and a desire to pass on what knowledge I had  gained over the years, suddenly had a new direction. Why not put it all on the wonderful worldwide web?  I don’t recall how I plumped for this particular site.  It was probably because it was free. A deep breath, here we go again on an even steeper learning curve.  I didn’t know the difference between a URL or HTML and the mind boggled when it came to pasting HTML into my page.  Anyway, here we are nine months on and this site has branched into a number of enterprises.  Those I am mostly involved with are Calligraphy at Bill’s Space    and just in time for the New Year, SCRIBES FOR PEACE  is up and running.  If you have not seen it yet, please have a look and add some PEACE to the page.  Did you know that on Facebook alone there are hundreds of groups, some with hundreds of thousands of members, all dedicated to the cause of peace?  Food for thought!
Some of you will know that Gill was admitted to hospital for major surgery in early November.  Many thanks for your prayers.  We are sure they have done the trick.  Gill is not yet fully recovered, but regains her strength day by day.  She gives a thumbs up and says, ” We are getting there “.  Thanks also to Gill’s GP.  To all at Luton and Dunstable Hospital, and Elizabeth Ward at the Watford General Hospital.
Thanks to all 4381 visitors from 53 countries, especially all you hard working people from the Teacher Forums.  Once again I am going to ask for some feedback.  If you don’t tell me what you think about this, that, or the other, I am dancing in the dark.  To all the scribes in the making I repeat again…….. ……..Practice, Practice, Practice and more Practice.
I wish you all a Happy, Healthy, Prosperous, and of course PEACEFUL New Year.
Cheers one and all.   Bill.
Oh.  I nearly forgot.  Keep watching this space.
0.337141 0.165825

Just a thought to keep us going for a day or two.