Last year my entries for this exhibition were ready-made pieces, and all I needed to do was mount, frame, and submit. I was pleased and not a little surprised when two of these were chosen to hang. Unsold at the time, but subsequently two of the three entries have found new homes.

This year, for Luton art ’12, I started from scratch. Each piece being specially made with the exhibition in mind.

First, a sketch I started around about the time of  Gill’s birthday was crying out to be completed.

Gillian first written with double pencil in an Uncial script half way down a sheet of A3 copy paper. The long drawn out strokes becoming branches and shoots growing organically as if in a hedgerow. Then traced as if mirrored. The “G” then becomes a bowl for the Gilldoodle tree to live in. 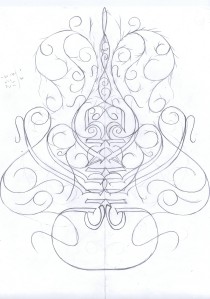 I had an unused frame in mind and some Canford? card I had purchased from Jewels Arts and Crafts Centre specially for this piece.

The next job was to coat the back of the piece with chalk, centre it on the card,  attach with masking tape and trace off the whole image. Then things began to get really interesting. I realised that I had used a more grippy tape than usual and could not detach the one from the other without removing some of the surface of the card. I decided to carry on though, and think of a way round the problem while working. Next mixed up some gold acrylic and with a pointed pen drew over the tracing. Filled in the letters with white, changed my mind, then crosshatched with gold. Each leaf was then “stabbed” in with the same pen using a bronze acrylic, once again bearing in mind the nature of a growing tree. Next, the flowers, simply sketched with silver acrylic, and petals touched in with white. 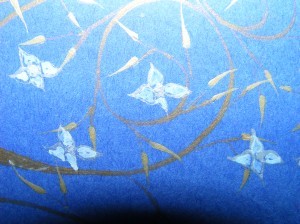 Then to the small problem with the background. The position of the blemishes was not conducive to hiding them in a border, so I accented them with sandpaper which made a very interesting raised nap surface that was continued over the whole of the unused card, and then with white pastel covered the piece and slowly but surely worked it into this.

Then tried with the frame 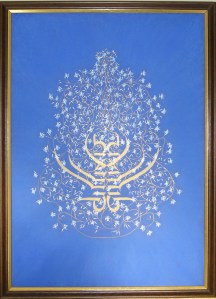 Yes. That is more or less what I had in mind.

I hope Gill likes it!

Now on to the next piece.

Like Loading...
This entry was posted in ,calligraphy,calligraffiti,lettering, how to, Namedoodles and tagged Art, calligraphy, exhibition, Namedoodles, uncial. Bookmark the permalink.

Please feel free to comment, make suggestions or ask questions. If I don't know the answer, I'm sure I will know someone who does.......SPAM WILL NOT BE TOLERATED. Cancel reply

This site uses Akismet to reduce spam. Learn how your comment data is processed.